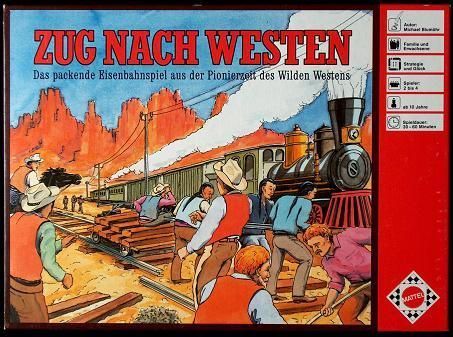 Rock Island was the old title of this game as it was published by Hans im Glück in 1987. It is a Railroad game for Ages 8 and up. The game objective is to be the first player to reach Kansas City with his train. During the setup, the map with the Mississippi in the middle is laid out. The hextiles are placed face down. All players start in Chicago. Then the prospectors start to work and build tracks by turning over the hextiles. Now the trains are able to move. The player being the most skillful track constructor will reach Kansas City first and win the game. There is no gameboard like usual boardgames. It is played on a number of hextiles which are laid out like a gameboard. These hextiles are - 90 tiles with railroad tracks on one side, nothing on the backside -10 river tiles, four of them have tracks (bridges) to cross the river -2 tiles Start (Chikago) und Ziel (Kansas City) In addition there are 4 sets of playing pieces consisting of 1 train and 1 prospector piece for each player 1 die 1 rules booklet