Empire of the Sun - Universal Statistics 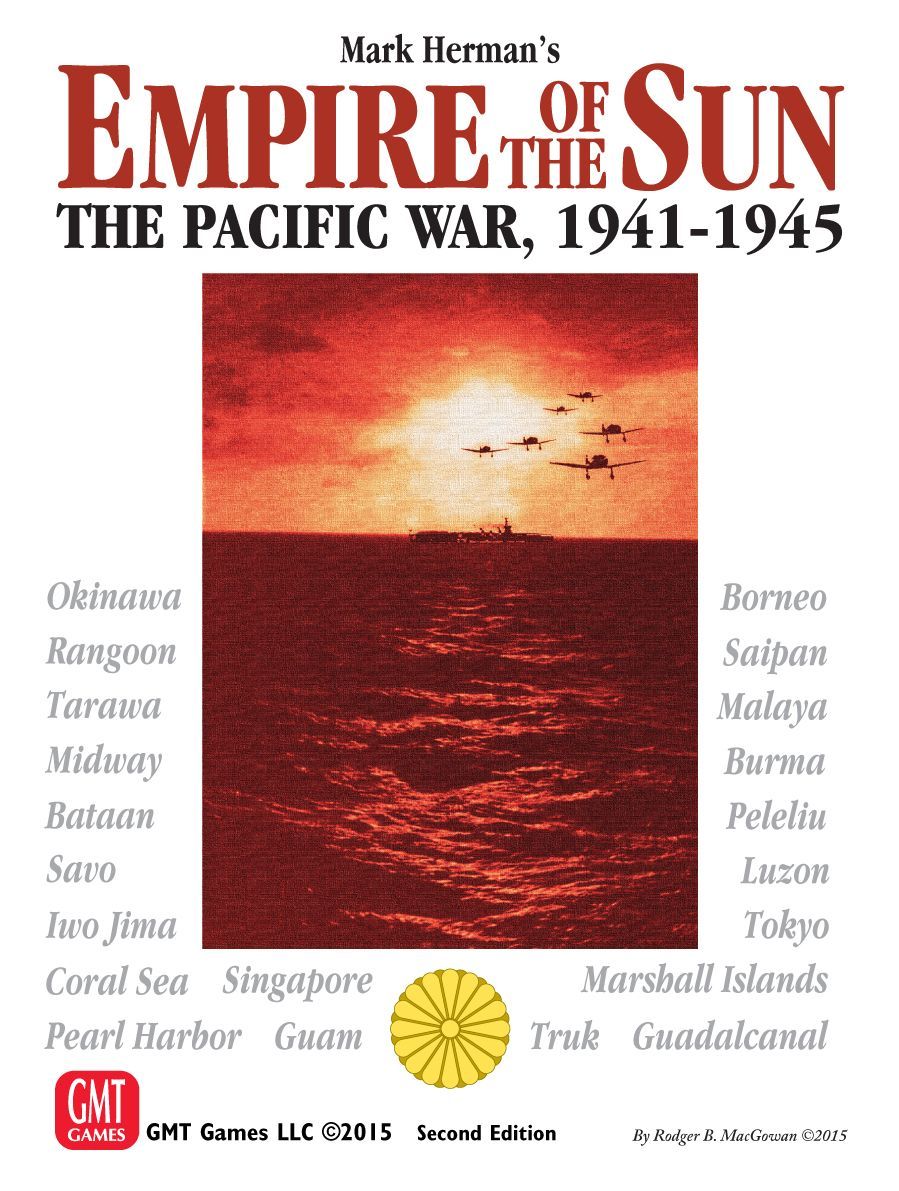 (from GMT website:) Empire of the Sun (EotS) is Mark Herman's third card driven design since he introduced the system to the hobby in We The People. EotS is a strategic level look at the entire War in the Pacific from the attack on Pearl Harbor until the surrender of Japan. EotS is the first card driven game (CDG) to move the system closer to a classic hexagon wargame, while retaining all of the tension and uncertainty people have come to expect from a CDG. Players are cast in the role of MacArthur, Yamamoto, Nimitz, and Mountbatten as you direct your forces across the breadth of the globe from India to Hawaii and from Alaska to Australia. This is represented on a single map based on a 1942 equal area projection of the entire theater of conflict. As in other games using the CDG system, players try to maximize the impact of their cards even as they hide their intentions and traps from their opponent. The player is faced with a wide set of clear strategic choices. The focus of EotS is on directing major offensive axes of advance. The Japanese early in the game are challenged to achieve their historical expansion as Allied forces battle the clock to react with their in-place forces trying to achieve maximum damage to the hard-to-replace Japanese veteran units. Combat in EotS is based on successfully bringing superior combined land, air, and sea forces to bear in a two-tiered combat system. The first tier is the resolution of air-naval combat, the second tier covers ground combat. The culmination of both tiers results in one side prevailing in battle. The key variable in determining strategic victory is the level of U.S. political will. The Japanese win the game by forcing the U.S. into a negotiated peace, which was not achieved historically. The Japanese achieve this by knocking countries like India, China, and Australia out of the war, while inflicting massive casualties on the United States. The delivery of the A-bomb on its historical schedule is not a guarantee, often necessitating Operation Olympic and the invasion of Japan. It is often in its darkest hour that the Japanese find victory in EotS. EotS scenarios were designed with the busy enthusiast, grognard, and competitive tournament player in mind. EotS was designed to be played n yearly scenarios (1942, 1943, and 1944) of three turns each that play in under two hours. If you are a fan of CDG's, EotS takes the genre into a familiar, but new direction. If you are a fan of classic hexagon wargames, this game has all of the features that brought you to this hobby in the first place, but with a new level of excitement and replayability. The game is comprehensive, but easy to learn. TIME SCALE: 4 months per turn MAP SCALE: 150 miles per hex UNIT SCALE: Brigade, Division, Corps, and Army DESIGNER: Mark Herman DEVELOPER: Stephen Newberg MAP & CARD ART: Mark Simonitch COUNTER ART: Mark Simonitch, Dave Lawrence, & Rodger B. MacGowan (from the designer:) Empire of the Sun (EOTS), uses a variant of my card driven system. The game has one map that covers the Pacific Theater of operations from India to Hawaii, and from the Aleutians to Australia. EOTS is the first card driven game to use hexes, which facilitates calculating movement and aircraft ranges. Each game turn covers 4 months (three turns per year) with a special December 41 (special two card) game turn, for a total of 12 game turns for the campaign. The game is at the strategic level using naval units built around a capital ship class (e.g., CV Wasp, BB Washington, etc.), air units at the Air Force/ Air Flotilla/ Air Division level, and most ground units are Corps/ Armies although there are a host of specialized units at the division and below level. The game has 165 cards divided into an Allied and a Japanese deck. The game uses a two tiered combat system with air-naval combat preceding ground combat. The system has players roll for combat efficiency, which is a strength multiplier from .5 to 2. This value multiplied by the unit strengths is the number of hits the enemy takes in combat, with some special conditions based on number of CVs present and the like. As far as game play is concerned, China is abstracted using a track whereby the play of certain events and Chinese offensives puts pressure on the Allies to support this theater with resources or see it fall and hurt Allied morale. This is balanced against the fact that Japanese land replacements come from this theater, so the more they draw it down for conflict in other locations, the more likely China will survive. Northern India and Burma are active theaters of operation where the majority of the continuous ground warfare in the game occurs. If the Japanese can successfully occupy Northern India, they can drive this nation and its Commonwealth units out of the war. Australia can also be knocked out of the war, although it is hard to keep it out permanently. Then of course there is the famous island campaigns with the US driving across the Pacific to knock Japan out of the war.