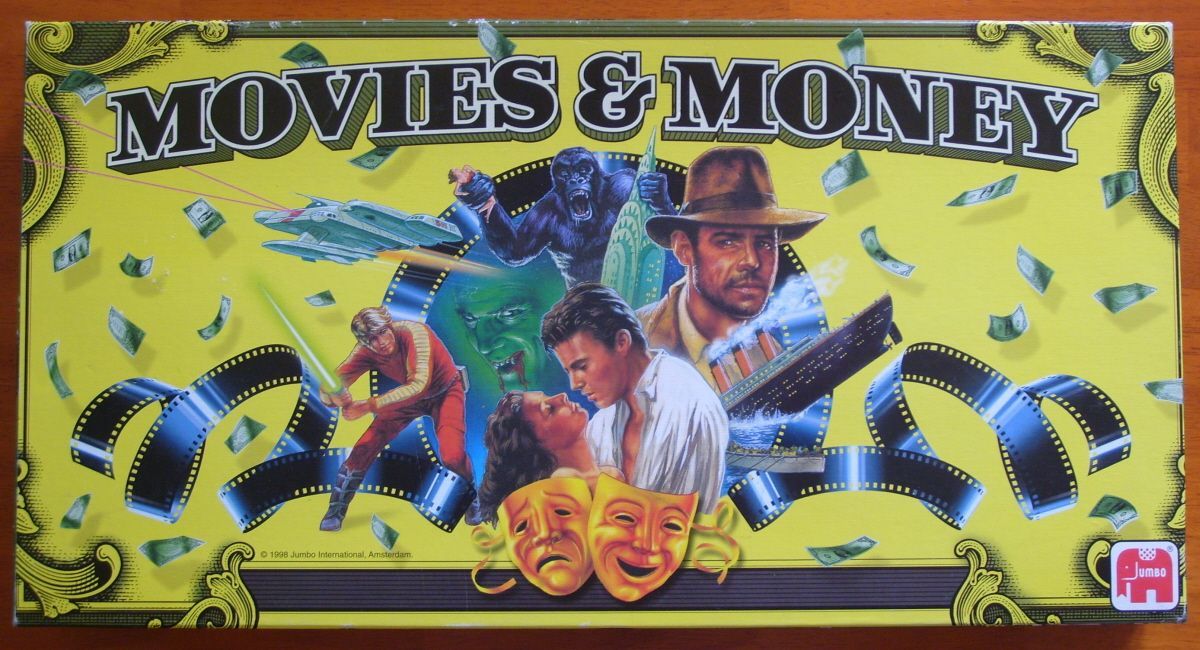 extrapolated from rules: Movies & Money A game for 2 – 4 players Ages 8 and up Manufactured by Jumbo Game materials Game board 25 miniature screens 25 movie cards 6 Golden Suns 2 special dice Play money Preparation Place the board on the table. Each player sits on one side of the board. The red, green, yellow or blue strip at the board’s edge determines the color each player uses. A player is chosen to be banker. He distributes to each player 1 million dollars (5 x $10,000; 3 x $50,000; 3 x $100,000; 2 x $250,000). He puts the remaining money beside the board and administers it separately from his own money. The 25 movie cards are mixed thoroughly and a card is put face down on each board space. The 25 miniature screens and the 6 Golden Suns are put beside the board. Everyone throws the numbered die once. The player with the highest result (the star equals 6) begins. The game proceeds after him clockwise. Play, phase 1 On his turn, a player throws both dice. The intersection of the column (number-die) and row (letter-die) determines a board space. If the movie card on this space is face down, the player can and should buy this space with this card. He pays $10,000 to the bank and turns the card face up. Now, a miniature screen is put on this space. The player takes a screen from the reserve and puts it on the space so that his color appears through the two gaps in the framework of the screen. Finally, the acquired movie card is put into the screen, face up. Play, phase 2 As soon as all 25 movie cards are owned and face up in miniature screens on the board, the second game phase begins. Now movie cards can change hands. Debts and bankruptcy If a player must pay a sum and no longer has sufficient cash, he must sell his movie cards and/or Golden Suns. The player chooses what he would like to sell. The bank pays the sums printed on the cards, and Golden Suns fetch the same amount. Sold movie cards are turned face down again, and the screens and Golden Suns go back to the reserve. How-ever, the bank only takes back cards and Golden Suns if a player is insolvent. A player who cannot settle his debts must declare bankruptcy. He gives all his remaining cash, miniature screens and Golden Suns back to the bank. The movie cards are turned face down again. The player retires from the game. If movie cards are turned face down in the second game phase, the game returns to the first game phase. Therefore, takeovers of movie cards that belong to other players cannot take place. Negotiations All players are allowed to negotiate with other players anytime, even if it is not their turn. Movie cards may be bought, sold or traded. Players can also negotiate in order to pay debts. They need not necessarily sell to the bank if they receive better purchase offers from players. Players can also negotiate whether owed sums on opponents’ movie cards can be reduced or even free of charge. Ending the game The game is over when only one player remains. He is king of Hollywood!