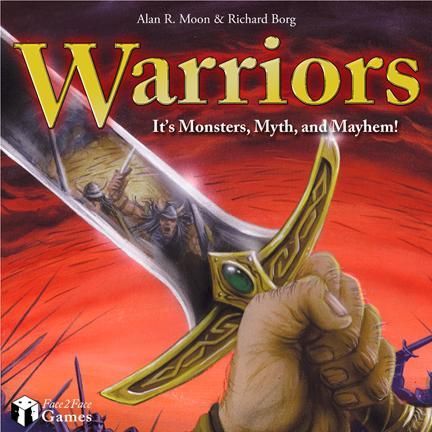 Warriors is a card and dice-rolling game with a fantasy military theme. Each player begins with a randomly dealt army of 11 units. Most will be creatures of one of the game's 6 types (Barbarians, Goblins, Elves, Trolls, Dwarves, Undead). A lucky player may also get Wizards (which protect creatures of one type from attack) or Catapults (one-use weapons that have a 50/50 chance of destroying a target card). Creatures come in three varieties (infantry, archers, cavalry). Armies are placed face-up in front of the players, and three rounds of warfare ensue. At the start of each round, players receive additional cards, including the vital Attack Cards, without which an army can only stand on the defensive. Attack cards are of two types. One ("Battle") allows all of a player's creatures of one type to attack creatures of either the same type or the type that the attacker most dislikes. Elves, for instance, may attack an opponent's Elves or his Trolls (the Elves' "natural enemy".) The other type of Attack Card ("Mercenary Army") allows creatures of different types to combine in an attack against creatures of any one type, but limits the number of attackers. Attack Cards also provide various bonuses to the attacker. The resolution of attacks is modeled on Risk. The attacker rolls up to three dice, the defender up to two (the number depending on how many infantry each side has in the battle). The side with more archers, if either, adds one to its high die roll. The highest and second highest rolls for each side are compared, and the low roller in each loses a card (with the defender winning ties). The attack continues until one side is wiped out or the attacker voluntarily breaks off. Attackers with surviving cavalry can then make further attacks. Players gain victory points for enemy units destroyed and for having the most creatures of a particular type at the end of the third round of play.