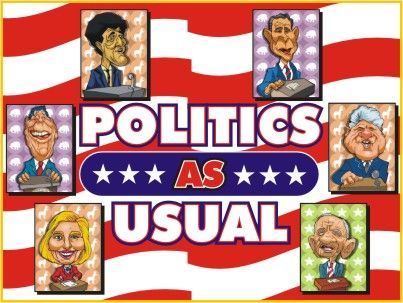 Politics As Usual is a fast paced card game with mass market appeal that makes each player a candidate campaigning to be President of the United States. Players battle to control Votes, launch Slander attacks, and play cards to gain an Edge. Gather enough Votes and you get to be President! You can even play cards for other players! Let's say a controversial Issue comes up that is worth negative points. After all, there are some topics that no matter what you say, you're going to lose voters. Wouldn't it be handy if one of your opponents gave a Good Speech on the issue? Each player is given a Candidate card at the start of the game representing a well know political persona. Each Candidate card has a built in special ability and Favor points. A revolutionary part of the game design is the introduction of "Favor" points. Each player starts the game with a couple Favor chips, and players may trade them back and forth as they wish. There are no rules governing the trading of Favors. Here's the cool part, at the end of the game, every Favor that you have that came from another player counts as a Vote. Your own Favor chips do nothing for you at the end of the game! Wheel and deal! Gather political favors and be the power all others seek in desperate times, and at the end of the day, you'll be seated in the Oval Office! Some have said this seems to make the point that political favors are just as important as votes in American Politics. Is this a bad thing? Maybe, but it's certainly Politics As Usual! Expanded by: Politics as Usual: Unusual Suspects