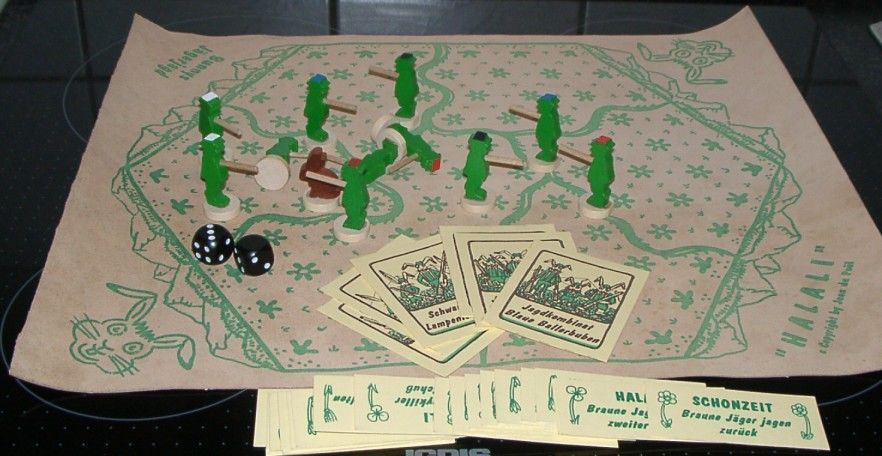 Eighteen hunters seek the last hare in Bavaria. They never hit the hare, but do manage to shoot each other ... Comes in a cardboard tube with a vinyl board inside. The wooden hunters have colored hats to denote their hunting clubs. There is also a wooden hare and a wooden bush. The hare is placed in the center of the hexagonally shaped board, and the hunters around the edges. The board is eleven spaces across, from one point of the hexagon to its opposite, so none of the hunters start very close to the hare. Each player draws a club card, denoting which color hunters are his own. This is kept secret from the other players. The first player then rolls the dice and the game begins. The 6-side dice are labeled Blank, 1, 2, 2, 3, and 4. If a 2,3 are rolled, for example, the player whose turn it is decides whether that means he moves two hunters up to three spaces each, or three hunters up to two spaces each. For one movement point, a hunter can either move one space directly forward (they all have little rifles which should point to one space at all times - that's the only direction they can shoot or move) or it can rotate 60 degrees. A player can move a hunter of any color he chooses - no one knows which hunters are whose, and since the object is to shoot all the opponents' hunters and not your own, you don't necessarily want to move your own, anyway. Except maybe to throw the others off track about which color is yours ... When all movement is done, check to see if any hunter is aiming at the hare. If so, roll the dice again, this time adding the numbers together to see how far a shot goes. If you get blank, blank, a gun blows up (remove a hunter). If you shoot far enough to hit the hare exactly, it blithely moves out of the way instead of being hit. If you roll the exact distance between two hunters, they shoot each other (if both aiming at the hare -- otherwise, only the one not aiming at the hare is shot) - remove the hunters. If you roll a number greater than the distance between two hunters, one of them dies - take your pick.