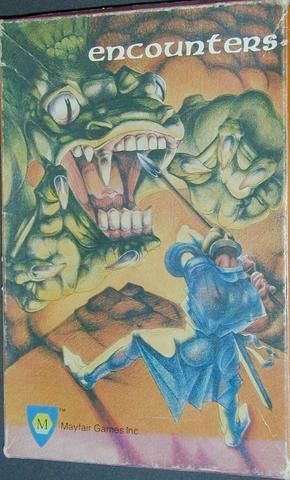 Encounters is a light, "take that" sort of card game with a D&D / fantasy theme. The game features a deck of cards consisting of heroes, monsters, weapons and treasure. Each player starts the game with a party of adventurers (hero cards) on their side (think clerics, fighters, elves, etc.). During your turn you draw two cards and play two cards, allowing you to perform actions like sending monsters to fight other players, equipping your heroes with weapons, or placing acquired treasure in your personal vault. A simple combat system is used to resolve monster attacks (which can kill your heroes), and then play passes to the next player. Adding some complexity and theme are a number of special ability rules that apply to the different heroes and monsters, such as spells, turning undead, armor abilities, fiery breath, etc. When only one player has heroes left standing, that player gets a gold bonus and the round ends. The cards are collected and a new round begins! Rinse and repeat until the winning player reaches a certain level of accumulated wealth. Re-issued as a CCG with more cards in 1995 under the name Fantasy Adventures.