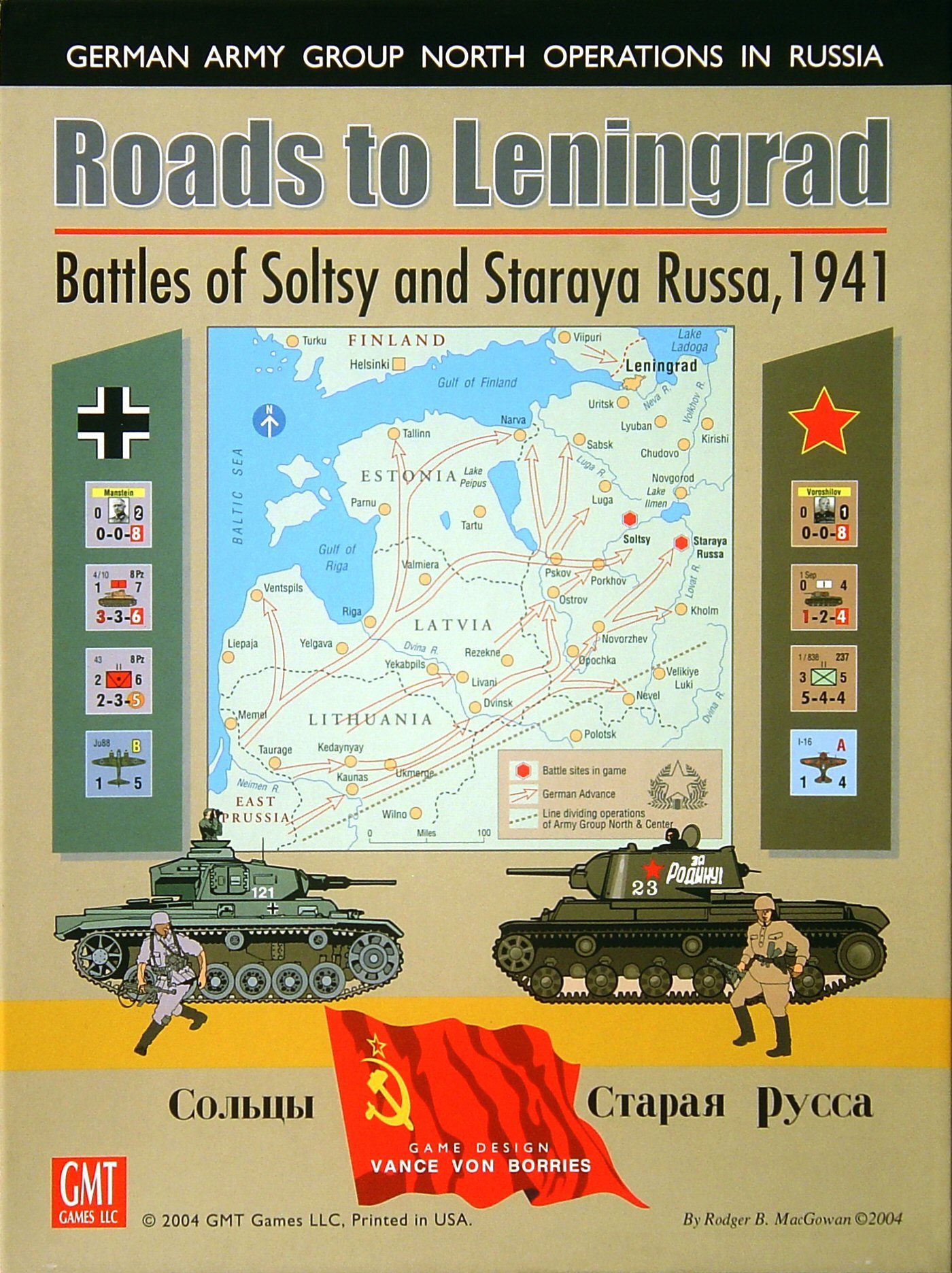 (from GMT website:) During the summer of 1941, the forces of German Army Group North appeared to be advancing irresistibly toward Leningrad, the second largest city in the Soviet Union, and the birthplace of the Communist revolution. But Leningrad was a long way from the German border, and the closer the Germans got to it, the more difficulties they encountered with terrain, their own lengthening supply lines, and stiffening Soviet resistance. In mid-July, approximately 100 miles south of Leningrad at Soltsy, a surprisingly strong Soviet force of about six divisions struck the German armored spearhead and pushed it back. The 8th Panzer Division did not suffer the catastrophic losses claimed by the Soviet, but attack did cause the Germans in this sector to halt for three crucial weeks before resuming their drive on Leningrad. In August the Soviets launched another counteroffensive, this time with ten divisions, against the German flank south of Staraya Russia. Just as the German offensive against Leningrad renewed, the Germans diverted critical motorized reserves to deal with the threat, winning a strategically barren victory far from their true objective. When the Germans did reach Leningrad, they lacked the strength to break into the city itself. The battles of Soltsy and Staraya Russia may well have saved Leningrad. Components: · 22 x 34 inch map sheet (19mm hexes - double sided) · 3 sheets of 5/8" counters · Rules book, Play Book, set-up cards, and player aid cards TIME SCALE 12 hours per turn MAP SCALE 1.2 miles per hex UNIT SCALE Battalions and Companies DESIGNERS Vance von Borries DEVELOPER Tony Curtis MAP & COUNTER ART Mark Simonitch (BGG description:)Roads to Leningrad is a package consisting of two separate operational level games on WW II --the Battle of Soltsy and the Battle of Staraya Russa. Scenarios: 1. The Battle of Soltsy: Manstein’s LVI (Panzer) Corps was assigned the road through Soltsy and was told to advance rapidly east to Novgorod and then north to cut Leningrad off from the rest of Russia. Manstein was on such a quick and tight schedule, he had no time to cover his flanks - a fact local Soviet commanders quickly exploited. 2. Counter-Blow at Soltsy: Led by the powerful and highly decorated 70th Rifle Division, the Soviets quickly surrounded German armor at Soltsy, stopped German motorized infantry in the swamps to the north, and raided German supply columns to the German rear. Von Manstein, unflappable in a crisis, organized a counterattack to allow the 8th Panzer to escape. The German 8th Panzer Division permanently lost about 30 tanks (with many others damaged) and retreated 25 miles. It was a Soviet victory that might have saved Leningrad. 3. Battle of Staraya Russa: In early August, the Soviet High Command prepared a surprise counter-offensive south of Lake Ilmen to relieve pressure on the increasingly hard-pressed armies defending Leningrad. Within two days, Soviet mechanized units had penetrated 35 miles and threatened to surround German X Corps. The Germans will clearly need reinforcements; can they hold on until Manstein's motorized troops arrive? 4. Manstein Attacks: To solve the deepening crisis at Staraya Russa, the German command called on Manstein's LVI Corps. On the 19th he struck, crushing the Soviet flank division in one day. In three days, he surrounded Soviet 34th Army, forced most of it to surrender, and then pushed on east. German play in this scenario depends on the mobility and timing of Manstein's troops. The Soviet player knows he is about to be trapped but maybe one more push would break the German infantry to the north.