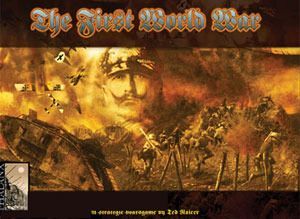 The game is by veteran designer Ted Raicer and contains: 1 hard mounted game board, 96 army counters (about an inch per side; incl. 24 dummies), 46 City Victory markers, 30 Combat chits, 1 Game Turn marker, 1 Game Round marker, 4 Victory Point markers, 8 Game Order Determination markers, 4 Surrender markers, 1 Treaty of Brest-Litovsk marker, 2 Dice, 1 Rules Booklet (8 pages, full-color). The game board divides the map of Europe into three Theaters of War - the Western Theater, Italian Theater, and Eastern Theater. Each theater is sub-divided into two or more numbered Fronts (11 fronts total). Each front contains the location of one or more victory cities (46 in total). Ordinary victory city locations are shown with a box, color-coded to show the original owning faction. Replacement centers are shown by a circle in place of a box. Each front also contains one or more faction bases (hexagon shaped) which act as a special sort of city. Bases and cities within each Front are connected by Attack Lines which indicate which cities may be attacked. Finally each Front lists which armies may be deployed or moved there. The First World War can be played by 2 to 4 players. There are two Alliances: the Allies and the Central Powers. Each Alliance is divided into two factions. The Allies are divided into the Western Allied faction and the Eastern Allied faction. The Central Powers are divided into the German faction and the German Allied faction. Each faction consists of one or more nationalities.