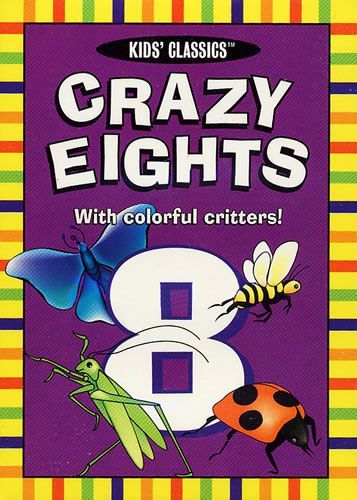 Public domain card game which plays with a regular deck of cards. The idea is to get rid of all your cards FIRST. Everyone gets some number of starting cards (like 5), and must play a matching card (colour/suit/value), or pick up 1 from the 'stock' pile, and either play THAT or pass. There are many variants, according to Hoyle. Some have 8s as the wild card (any colour/value), while other use Jacks - hence the alternate names. All seem to have at least one 'pick up #' card, and one 'skip a turn' card. Variants also include pick-up 2s, which could accumulate if more 2s were played consecutively (pick up 4, 6, or 8), and Jacks as the skip-a-turn. In other variants played with 4s as skip-a-turns, Aces as pick up 1s and Queen of Spades as pick up 5. Crazy Eights is the game upon which the commercial UNO is based.