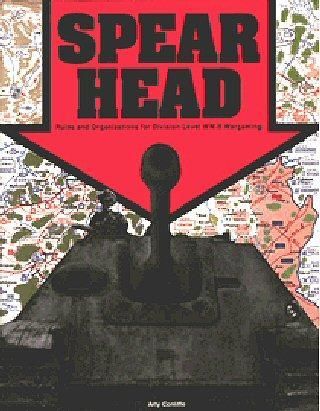 Spearhead is a complete rules set that simulates Division-level tactics of WWII. The emphasis is on commanding a multi-battalion force, and all game mechanics serve that priority. Players command multi-battalion forces, using division-level tactics. Pre-game orders determine how units perform, with limited ability to change plans on the fly No plan survives the first ten minutes of a battle. This truism is frequently misinterpreted and used by many to argue against the use of a restrictive command control system. Above all, it does not mean that a new plan can be extemporized to replace the faulty one. A commander adjusted as best he could, given the systematic limitations of his troops and the availability of reserves. These factors are of paramount importance in Spearhead. Expanded by: Great War Spearhead Scenario books: Where the Iron Crosses Grow :Eastern Front White Star Rising :Western Front Blaze Across the Sands :North Africa Forgotten Battles :Various theaters