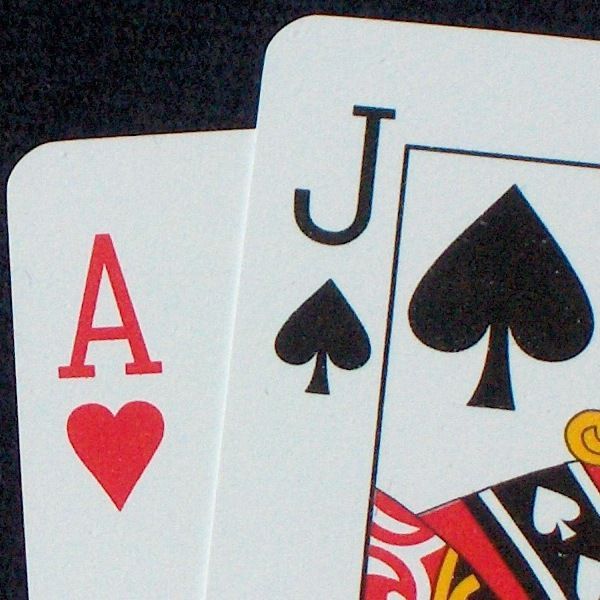 BlackJack originated in French casinos around 1700 where it was called "vingt-et-un" and has been played in the U.S. since the 1800's. Blackjack is played with a standard deck of 52 playing cards. In a Casino, usually six (6) or eight (8) decks of cards are shuffled together and placed in a card shoe for distribution. The player must wager before any cards are dealt. He does this by placing his bet in front of his table position. Next, the dealer deals two cards to each of the players and two to himself. (One of the dealer's cards is dealt face up, one is dealt face down). Face cards count as ten, ace counts as one or 11, and all other cards are counted at their face value. A blackjack occurs if the player's first two cards are an ace and a ten or face card. This is usually a winning hand, although if the dealer also has a blackjack, it is a tie. A winning blackjack pays the player three to two. The dealer must draw on 16 and stand on 17. (A dealer total of 17 including an ace, or "soft 17", must be drawn to in some games and must stand in others). Options: Hit or Stand - Hit means to draw another card, which the player signifies by tapping the table with his cards or a similar hand motion. Stand means that the player wants no more cards, which the player signals by placing his cards under his wager or holding his hand in a horizontal direction. If the player hits and busts (goes over 21), his wager is lost. Double down - The player is allowed to double his original bet on his first two cards, then draw one more card. Splitting - If the first cards a player is dealt are a pair, they may be split into two hands which are played separately. The bet on each hand must be the same amount. Aces receive only one card. After splitting, Ace-ten counts as 21, and not as blackjack. Insurance - A bet not exceeding one-half of the original bet. When the dealer's up card is an ace, the player may take insurance. If the dealer's down card is a ten or face card, the player wins two to one. Any other card means a win for the dealer. Surrender - To give up after the deal of the first two cards. Only one-half of the original bet is lost. Not all blackjack games offer surrender. When not playing at a casino, it is usual for the role of Dealer to rotate among the players. Pontoon is a similar game, but there are some small rules variations. For example, the dealer wins on ties and both of their cards are dealt face down.