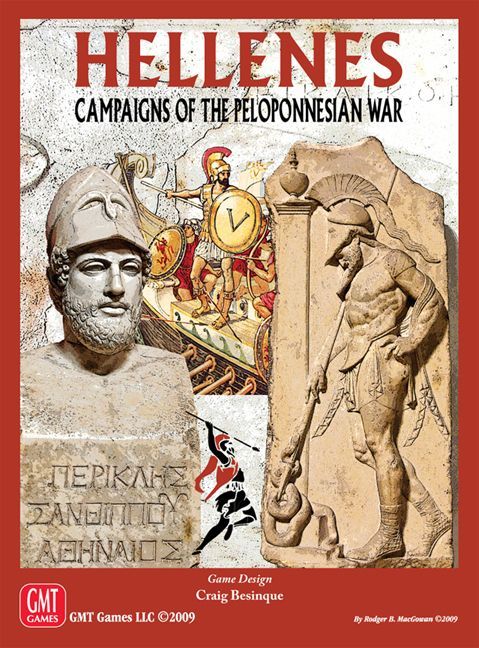 Hellenes: Campaigns of the Peloponnesian War (GMT Games) is 2 player game on the Peloponnesian War of the Greek classical age designed by Craig Besinque (EuroFront series). Based on a variant of the Hammer of the Scots/Liberty system, Hellenes features good historical flavor, fast play, and lots of options for both players. One player plays Sparta, the dominant land power of the era; the other plays Athens, the dominant sea power. Each side also seeks the allegiance of minor Greek city-states and barbarian tribes: some that persevere and others that come and go. Revolts, sieges, leaders, wintering, and civic discord all play important roles. The object of the game is to erode enemy prestige to the point of Surrender by capturing cities, winning battles, and devastating enemy territory with raids. Walled cities are very strong in defense, leaving Siege as a common method of reduction. But if a Siege is broken by a relieving force, the lost battle reduces the besieger's prestige! The map depicts Ancient Greece in the Aegean area, including the Peloponnese, continental Greece, Macedonia, Thrace and Ionia. A separate area on the map contains Sicily. Units include fleets, cavalry, archers, infantry and hoplites. Cards drive military actions and special events. Each card has both an Action value and an Event, and can be played for either purpose but not both. Actions include unit buildup, adding new units and group movement. Events include leader change, plague, barbarian uprisings, revolts, civil unrest, etc. Hellenes includes 4 scenarios: The 431 BC Campaign (10 turns), The Sicily Campaign (5 turns), The 415 BC Campaign (12 turns), and The 413 BC Campaign (10 turns). Each one plays in about 3-6 hours. Designer: Craig Besinque Developer: Joel Toppen