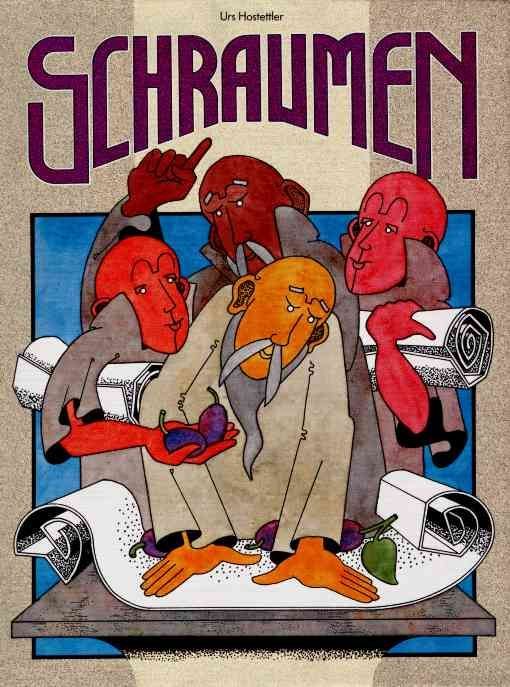 Schraumen is a card game based on a nonsense culture, enacting nonsensical laws written on scrolls, paid for with plums. The name of the game is a portmanteau word from the German Schriftrollen (Scrolls) and Pflaumen (plums). The 77 scroll cards are shuffled and the top 11 removed from the game without looking at them. Deal each player three scrolls and give each player seven plum tokens, which are both money for bidding and victory points at the end of the game. Each scroll is a rule of the game that must be followed when the scroll is played. If a rule cannot be followed, the scroll is burned in the fire - that is, removed from the game. Examples include, "Each player must put three plums in the garden," if at least one player has fewer than three plums. Or, "The player with the most plums must give all other players a plum," if two or more players are tied for having the most plums. Players take turns reading the scrolls they wish, enacting the new laws, all of which involve plum distribution in some way. You don't have to enact any of your scrolls unless you have more than five, at which point you MUST activate (or burn, if illegal) enough to bring your hand down to five cards. A player then draws a scroll, reads it silently, and auctions it off without telling the others what's on it. He may bid for it himself. The game ends when either all scrolls are taken or when the text of a read scroll requires the game to end. The player with the most plums wins.