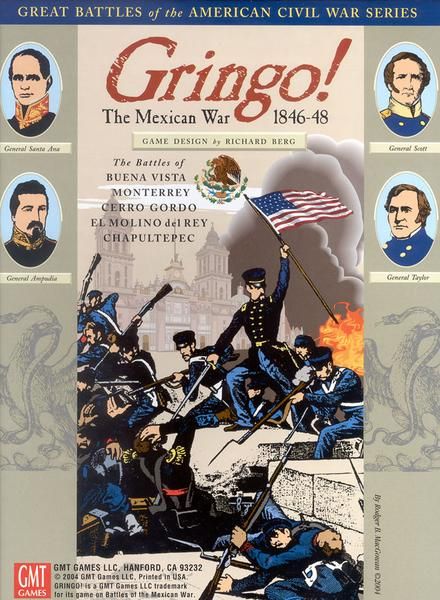 Gringo! The Mexican War 1846-1848. For the battles in Gringo!, both sides run the gamut from mountain assaults to street-fighting, allowing gamers to see some of the differences between ACW-era tactics and those of the Napoleonic era. The battles included are: Buena Vista, the classic battle of the war, with Zach Taylor's decimated army making a valiant stand against Santa Anna and a force three times Taylor's. Monterey, with the North Americans launching a three-pronged assault against, into, and through the beautiful city of Monterey, complete with huge fortifications, high peaks, bull rings, cathedrals filled with ammunition, even a telegraph system. Cerro Gordo, Scott's first meeting with Santa Anna, on the dangerous mountain roads leading towards the heart of Mexico. El Molino del Rey, where Santa Anna makes a last, well-entrenched stand outside Mexico City. Will that Mexican cavalry division ever move? Chapultepec, a mini-battle, in which the gringos have to scale the precipitous heights of this immense fortress guarding the roads into the Mexican capital. "Stonewall" (pre-nickname) Jackson, hidden mines, wall-scaling, and those courageous Mexican pre-teen cadets. The game rules are simplier (GBACW v4.3) with reduced command rules (for the smaller armies); they also include extensive rules for street-fighting and the square formation. The game includes some of the most colorful characters in military history: General Zachary Taylor & inept division leaders Twiggs & Pillow for the Americans; head throwing General Pedro Ampudia and Generalissimo Antonio de Santa Anna. GRINGO! is easily the most playable, colorful and challenging of the GBACW series games to date. 2 22" x 34" maps (1-backprinted), 4 countersheets, plus the usual rules and charts. Time Scale: 60 minutes per game turn Map Scale: between 45-125 yards per hex Unit Scale: Each Strength Point = 50 men Players: 1-6 Expanded by: Battle of Churubusco Battles with the Gringos, Mexico 1846-62