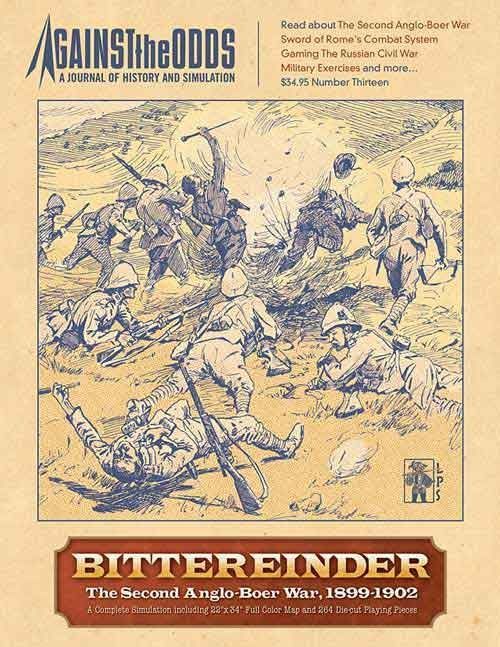 Bittereinder is a two-player simulation of the entire 2nd Anglo-Boer War of 1899 to 1902. It depicts the events arising from President (of the Zuid Afrikaansche Republiek - ZAR) Paul Kruger's ultimatum to the British Empire on October 9, 1899, demanding the following: • The withdrawal of British troops on the borders of the ZAR, • Discontinuing the British military build-up in South Africa, and • Settling all differences between Britain and the ZAR through arbitration. The Republic of the Orange Free State threw its lot in with their Boer (literal translation: farmers) brethren in the ZAR. At 17:00 on 11 October 1899 the ultimatum expired. The British Empire was at war with the Boers, the white tribe of Africa. The war would straddle the centuries, ending on May 31, 1902. It was a bitter defeat for the Boers and a victory bereft of glory for the world's mightiest empire. Full color 22"x34" map 264 full color 5/8" die cut counters Rulebook length - 14 pages Charts and tables - 2 pages Complexity - Medium Solitaire suitability - Medium Playing time - 8 hours