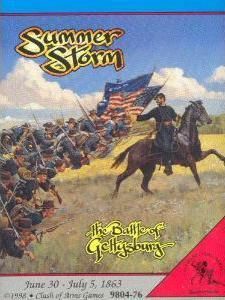 A tactical and operational-level game of the battle of Gettysburg. The game's focus is on morale and command; the operational game is a double-blind recreation of the movements leading up to the battle, the results of which are transferred to the tactical maps. The game includes a tactical map area of 51x44", two 17x22" operational maps, 980 counters, and numerous player aids and charts. This monster game's graphics were done by the game's designer--the prominent wargame artist Rick Barber, and the results are visually highly impressive. The tactical maps are extremely detailed, and feature virtually every feature on the actual battlefield.