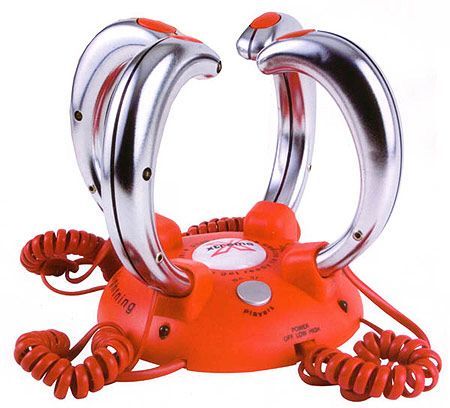 The game consists of four handles, each equipped with a button. Each player grabs a handle and the game is started. A red light starts to blink and a nasty wailing sound is played. Then, suddenly, the light will turn green and sound goes silent. At that point, players must push the button in their handle. The last player to do that gets an electrical shock. Players will also be shocked, if they push the button while the light is red. The game uses three AAA batteries, so the shock isn't dangerous but it certainly adds an element of tension to the otherwise rather simple test of reacting speed. Re-implemented by: Lightning Reaction Extreme Lightning Reaction Revenge