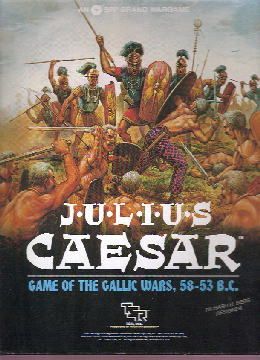 Julius Caesar is a game of the conflicts between the legions of Rome and the tribes of Gaul in the years 58 B.C. TO 50 B.C. The Roman player's objective is to subjugate and control as many tribes as possible. The Gallic player's objective is to rally the tribes, while disrupting Roman movements, raiding Roman-held territories, and breaking up Roman alliances with friendly tribes. Short campaigns lasting one or two years can be played, or the entire nine year conquest of Gaul can be undertaken. The game components include a 22" by 34" mapsheet, a 24 page rulebook, 2 six-sided dice, 200 counters, a counter tray, and a deck of 59 cards.