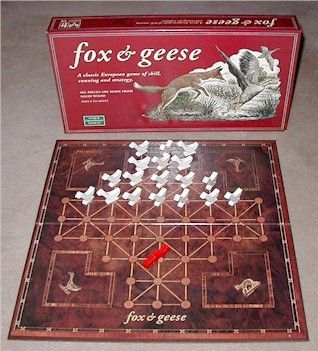 Possibly a relative of Hnefatafl, Fox and Geese is a hunt game played on a cross-shaped board of thirty-three points connected by vertical, horizontal, and alternating diagonal lines. Like many ancient abstract strategy games, the number of pieces and their starting positions varies from region to region but the general play of the game is the same: one player controls a single piece, the fox, the other player controls the geese (usually 13 to 17). The fox player tries to remove all of the geese from the board by jumping them. The geese player tries to prevent this from happening by pinning down the fox so that it cannot move. The game of Solitaire can be played on a Fox & Geese board, and some sets include additional markings for playing Siege. There are some claims that Fox and Geese is related to an earlier game called Halatafl, but there is as yet no concrete definition of what exactly this game was or how it was played. There are also several contemporary games using the Halatafl name, at least one of which is played on a similar board to Fox and Geese but with differing rules. https://av.getinfo.de/media/11310?2 ( CC Attribution - NonCommercial - NoDerivatives 3.0 ) http://vimeo.com/51819749