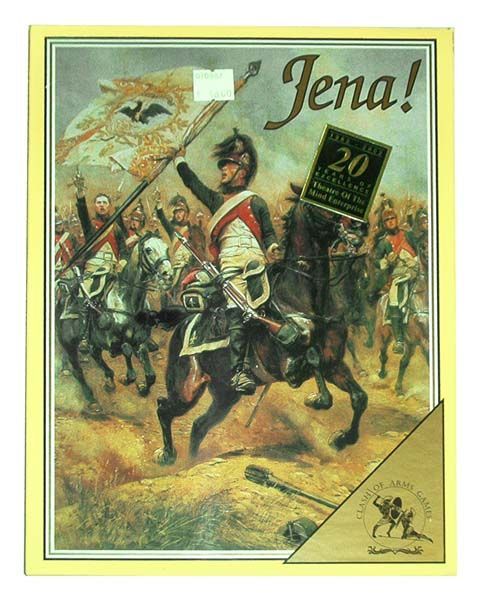 Discern the Secrets of Napoleon's Greatest Maneuvers. "My God! Can these Frenchmen fly as well as fight?" Jena! The name we give to one of the truly decisive campaigns in history; whereby the sons of the French Revolution under the command of emperor Napoleon Ier, meet and utterly destroy the heirs of Frederick the Great. Five scenarios span the opening engagement at Saalfeld through the French victories of Jena and Auerstædt. The Campaign Game opens with the French exiting the mountains of Franconia and Thuringia in a drive on Leipzig, hoping to knock the Saxons out of the opposing alliance. Their cavalry probes ahead. They have no idea where the Prussians are, or their Russian allies. At the same moment Brunswick directs three Prussian armies to drive across the supposed French line of communications. As flank guards skirmish, the veil is lifted. Both sides find their armies abreast one another heading in the opposite directions! It is a race to see which army can adapt to the new circumstance quickest. Napoleon has the edge, and it is what separates warfare of the 18th and 19th centuries from one another ... La Batallion Carre! With Jena, like its predecessor L'ArmÃ©e du Nord, players can come to full grip with the game in less than 12 pages of rules. The playing surface varies by scenario and can be one, two or three 34" x 22" maps in size. Jena also includes 1 and 1/2 sheets of the most elegant, state-of-the-art playing pieces today.