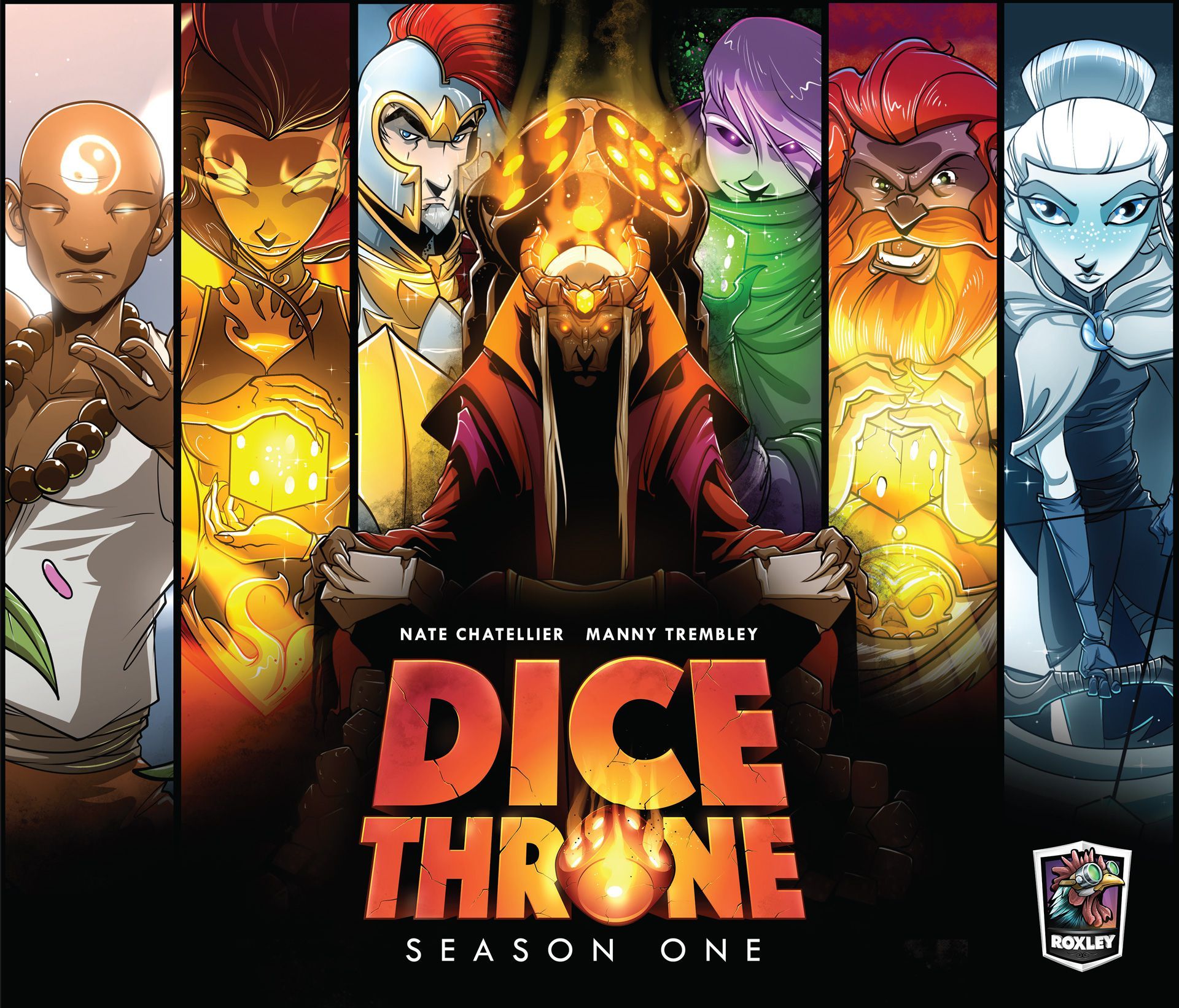 Dice Throne is a game of intriguing dice, tactical card play, powerful heroes, and unique abilities. It's a fast-paced 2-6 player combat game (1v1, 2v2, 3v3, 2v2v2, or free-for-all). Select from a variety of heroes that play and feel completely distinct from one another. Attack opponents and activate abilities by rolling your hero's unique set of five dice. Accumulate combat points and spend them on cards that have a large range of effects, such as granting permanent hero upgrades, applying status effects, and manipulating dice directly (yours, your teammate's, or even your opponent's). Let's take a look at a turn of a 1v1 game. The game begins with 2 players selecting their heroes. Player One chooses Moon Elf and player two picks Barbarian. Each player begins the game with 50 HP (Health Points). Player One (the Moon Elf) won the roll to go first. The Moon Elf draws their 4 starting game cards and begins the game with 1 CP (Combat Point). Note- The player that wins the starting roll does not draw a card (above their starting hand of 4) or gain CP above their 1 starting CP. The Moon Elf then checks for status effects (like poison, or Burn) to resolve. The next phase is called Main Phase (1). This is where the Moon Elf player can upgrade their hero board with cards from their hands if they have enough CP to pay for the upgrades. They can also play any Main Phase Action cards (blue cards). Then they enter the Offensive Roll Phase. The Moon Elf can take up to 3 roll attempts (with their 5 dice) to accomplish an action or attack from their hero board. After deciding on an action within the 3 roll attempts an action is declared. Then the Defensive Roll Phase begins where the opponent (Barbarian) can use their defensive roll (as it appears on their hero board). The amount of damage or incoming status affects are resolved and that concludes the Defensive Roll Phase. During Offensive and Defensive Roll Phase any player can play Roll Phase Action cards from their hand as long as they have the CP to pay for it. The Moon Elf player enters their second Main Phase where they can do any final hero board upgrades or play blue Main Phase Action cards. The Moon Elf then must discard any extra cards over 6 from their hand. The Barbarian player begins his turn by drawing one additional card (over his starting hand of 4) and gaining one CP (Combat Point) for a total of 2. The Barbarian then follows the same phases the Moon Elf. The game alternates hero turns until one player is at 0 Health. DiceThrone is for 2-6 players, ages 8+, and runs 20-30 minutes for a battle. With the ever expanding gallery of heroes the game feels fresh each time you jump in!